skip to main | skip to sidebar

David Stoliar- Only Survivor of the Struma Sinking 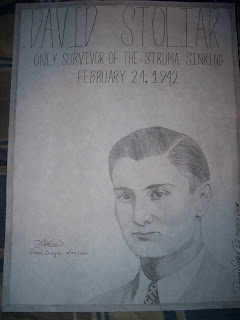 I had never heard of the "Struma" or of David Stoliar until a few months ago. The Struma was a ship carrying over 700 Romanian Jews from Axis-controlled Romania to British-controlled Palestine (Israel) in 1941-1942. The engine gave out in the Black Sea, and the ship sat at Istanbul while Turkish and British politicians tried to work out an agreement regarding the fate of the passengers. The British did not want such a large number of Jews to enter Palestine, and the Turks refused to let the passengers off the ship. An agreement could not be reached, and finally the Turkish government had the ship towed into the Black Sea and cast adrift. The night of February 24, 1942, a Russian sub mistook the Struma for a Nazi cargo ship and torpedoed it. 768 men, women, and children died that night, and only 18 year old David Stoliar survived.

David has spent his life keeping the memory of those who perished on that night alive. Were it not for his survival and his devotion to the memory of the victims, this tragic event might be a forgotten foot-note, buried on the back pages of seldom read history books.
Posted by Darren at 4:21 PM 3 comments: 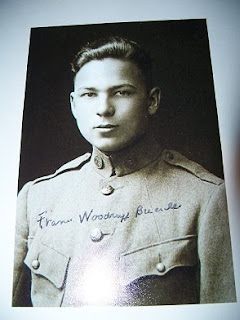 Frank Woodruff Buckles lied about his age and joined the Army at the age of 16, serving at the Front as an ambulance driver. That was in 1917, over 93 years ago. Of all the "Doughboys" who answered the call to fight, fate would have it that Frank Buckles would be the last. The last few years of his life were spent as the representative of all of those who had passed before him- he more than willingly took on this role. He passed away shortly after turning 110 years old, and was laid to rest yesterday in Arlington National Cemetery.

His flag-draped casket lay in repose in the Chapel beneath the stage of the Memorial Amphitheater in Arlington, directly behind the Tomb of the Unknown Soldier. An "Old Guard" soldier kept constant vigil as people from all walks of life passed by to pay their respects. As I stood outside waiting for the funeral service later, his daughter and other relatives walked past me as they made their way to the Chapel.

Military personnel and other security people soon cleared the area even further, and as I waited with others across the street a big motorcade showed up and parked nearby. The final two mourners, The President and Vice-President, had arrived to pay their respects to the Buckles family. In the pictures here, President Obama is obscured by the spear point being held by a Native American veteran, but Vice-President Biden is directly next to it.

A U.S. Army band marched to the front of the Amphitheater, followed by "The Old Guard" and a military cassion. The casket was brought out and placed upon the cassion for its final journey. As the horses pulled away, the band played "Over There" for Frank Buckles one last time. Myself and the others present were allowed to walk behind it to the grave site. I couldn't see or hear much of the graveside service, as there was a rather large crowd present. A group of Patriot Guard Riders (they shield the funerals of servicemen and women from protesters) stood in formation a short distance away.

Many people (myself included) thought Frank Buckles deserved to lie in state under the dome of the Capitol Building. That was not to be, but what was done for him was truly fitting, and I think he would have been pleased nonetheless. To me the most poignant moment was when the Cassion carried Frank Buckles and the memory of all of the Veterans of World War I on their final journey to the tune of "Over There," with military men and women and everyday citizens looking on, their hands over their hearts and saluting. 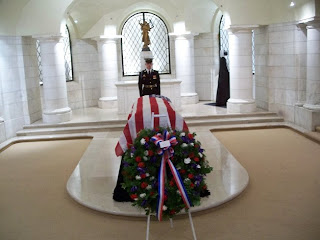 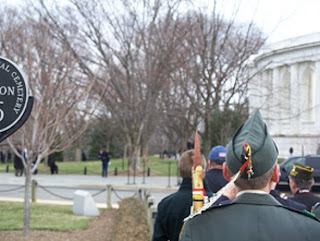 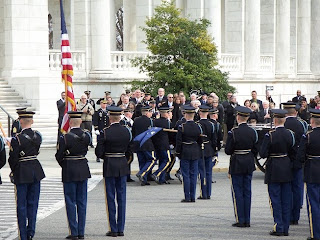 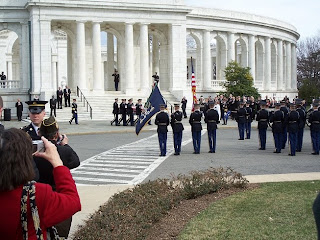 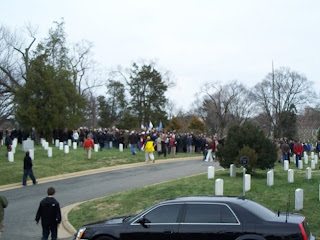 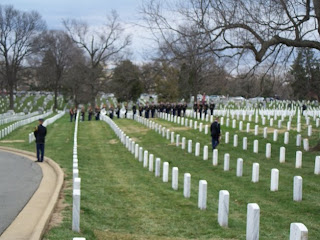 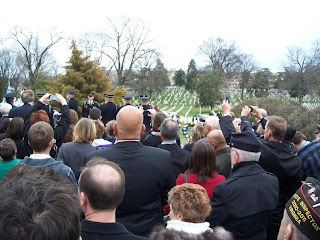 Posted by Darren at 1:57 PM No comments: 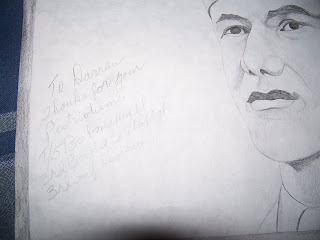 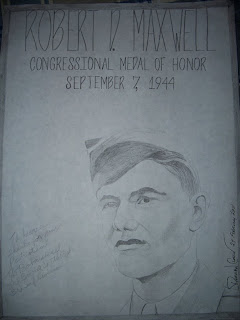 Robert D. Maxwell recently turned 90 years old, but in fact he selflessly gave his life on September 7, 1944 in a farmhouse in Southern France. An American Command Post had been set up in the house, and Maxwell was standing guard that evening. The Germans opened fire and he could see them advancing, trying to launch grenades at the house to kill the American Officers inside. Maxwell and three other soldiers tried to defend themselves armed only with pistols, and finally one of the grenades managed to clear the fence that had been set up around the house, landing just outside the doorway. Maxwell ran over to toss it away, but there wasn't enough time. Thinking only of saving his comerades, he threw himself on the grenade, his body absorbing the blast. Although permanently injured, somehow Maxwell survived. He received our Nation's highest military honor on May 12, 1945. He is one of only 16 Medal of Honor recipients from World War II still living.
Posted by Darren at 12:33 PM No comments: 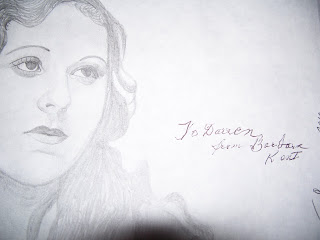 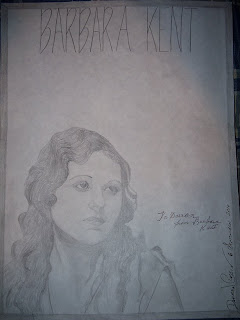 Barbara Kent, at age 104, is thought to be the only living person who had starring roles (as an adult) in Silent films. She began her film career in 1925, and made her last picture in 1935. One of her most notable films was "Flesh and the Devil" where she played the heroine opposite Greta Garbo. She retreated from public life following her film career, and in the nearly 80 years since she has apparently never granted an interview, and has been extremely private. I've read that for the most part she does not even acknowledge her film career, and neighbors simply know her as an elderly neighbor. She has been so private that many times people do not realize that she is still living, especially due to her advanced age.
I can't say how I obtained her address, but when I wrote to her I told her I would not give it out or make it known, and I only briefly mentioned her film career. I didn't really expect to get this back at all, but for some reason she decided to grant my request for an autograph. I'm pretty thrilled that she apparently made an exception in my case!
Posted by Darren at 4:22 PM 3 comments: 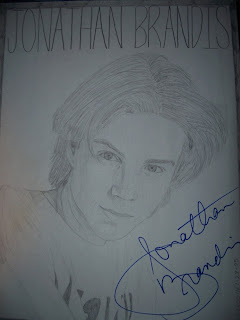 My sister used to be in love with Jonathan Brandis. I drew this picture of him, explaining how my sister liked watching him on the show "SeaQuest DSV" and asked if he could autograph it so I could give it to her for her Birthday (it was 1995, and she was turning 10). A few weeks later I got it backed signed. From what I read, despite getting volumes of fan mail, he would actually reply to fans who wrote to him. He had appeared in films and television since the age of 9.
Fast forward 8 years later, November 11, 2003- Depressed, subject to bouts of heavy drinking, his acting career in a slump; 27 year old Jonathan Brandis decided he couldn't handle his life anymore and hung himself .
Posted by Darren at 2:50 PM No comments: 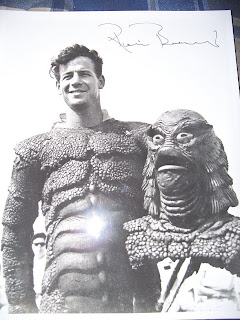 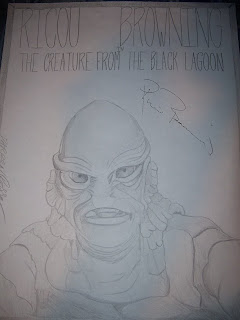 Ricou Browning has been involved in many films over the last 55 years, but the one that everyone knows him from is the 1954 Sci-Fi classic The Creature From the Black Lagoon. Actor Ben Chapman played the Gill-Man in the on land scenes, but the under-water scenes had Ricou wearing the creature outfit.
When I sent this I didn't know what he actually looked like, so I asked if he could give me a photo of himself. He sent the one pictured, ona break from filming. He wrote me a letter thanking me for the picture, and stated about the photo he sent: "The picture was taken many many years ago but I'm still a handsome Devil!"
Posted by Darren at 3:53 PM 2 comments: 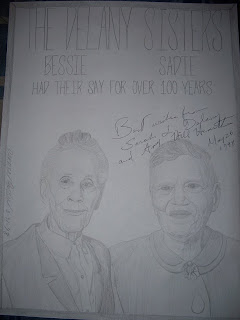 Sadie Delany and her younger sister Bessie never let racism stop them from acheiving their goals. Born the daughters of a slave, Sadie became the first black person allowed to teach domestic High School Science in New York City. Her sister Bessie was the second black woman licensed to practice dentistry in New York State. The two never married, and lived together for decades. In 1991 they became famous with the publication of the book "Having Our Say: The Delany Sisters First 100 Years." At the time of publication, Bessie was 101 and Sadie was 103. Sadie passed away in January 1999 at age 109. She signed this for me in May of 1998. The actual author of their book Amy Hill Hearth also signed it. I'm still surprised that at ge 108, her handwriting was much better even than mine!
Posted by Darren at 5:35 PM 1 comment:

Darren
I started drawing "notable" people in 1993, when I was a senior in High School. I always draw two identical pictures, so the person can keep one. I generally always draw older people because I've always found them more interesting subjects (and they're more likely to respond). I would say my favorite ones are the people who aren't necessarily "celebrities" but circumstances caused them to be in the right place in the right time to have a place in History.